Thoughts about The Occupy Movement (2/2)

In my previous blog post I briefly looked into the Occupy Movement's organisational structure and how it might be represented as a network model. In this second part I will first have a quick look at classic model corporations, and then see what key characteristics a new model corporation might have.

Pick any corporation at random** and if it includes more than one person it is a safe bet that it has a vertical, top-down -hierarchy where the people at the top have more power and control than people below them. This kind of organisational hierarchy is the same as the Tree topology (and a Tree without branches is a Line). 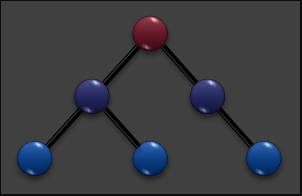 It is also likely that the people at the top are enjoying higher salaries and better benefits than people at the bottom, and in itself this is understandable: in many cases the people at the top made the initial investment in time, money and hard work (not to mention personal risk) to get the business started and then nurtured it to become a growing business with job opportunities for other people, thus also benefitting the society. Few would argue against the founders' right to claim a financial reward for their work, investment and risk.

And yet, as a corporation grows in size so typically does the gap between the top and the bottom. This becomes a special grievance with older corporations where the founders are no longer around and people begin to think that the current top management has not earned the right to receive millions in stock options, salary and other benefits solely by virtue of their position within the organisation, as opposed to actually improving things - especially if the corporation is laying off people or having other troubles at the same time.

(** In case you randomly picked a corporation with a matrix organisation please toss it away and wipe your hands clean. Matrix organisations obscure responsibilities and confuse matters of authority, and any corporation that has elected to utilise this organisational model deserves all the misery, confusion, frustration, angst and failure that follows.***)

Vertical Hierarchy as a Social Structure

In a society vertical hierarchies can be seen e.g. in representational democracy at the best and in autocracy at the worst, so it is no wonder we see most corporations organised after the same model: the CEO sits at the top (or the Board of Directors, if one insists), and either micromanages everything or governs through directors and managers below him. The people at the top govern the organisation while the people at the bottom tend to handle the heavy lifting that keeps the business afloat. The people at the top determine who does what, and how they are compensated for their efforts, and in many cases also has control over how the careers and professional skills of the people below them are being developed.

And here's the rub: when people are given power over other people it is expected that they also assume responsibility over the same people. A good leader takes care of his/her people and encourages them to improve themselves by offering them opportunities and space to grow, and by rewarding success. The worst leaders are selfish exploiters who do not care what happens to people below them, as long as they personally prosper. Unfortunately I think there are too many of the latter kind in the corporate world.

It is also common that people who have power and wealth prefer to distance themselves from people who lack either. By doing so they lose a powerful resource, as the organisation's low ranking people often have the best understanding of practical problems and possible solutions concerning everyday busines operations, but without a practical way of communicating with the organisation's higher layers, this knowledge and the possibility of new innovations is lost (hint: suggestion boxes and other anonymous, impersonal methods simply do not work). Each managerial layer between employee and CEO increases abstraction and ambiguity as the message is repeatedly summarised and modified; signal-to-noise -ratio deteriorates.

For example, once when I was working as a consultant in a large international mobile phone manufacturer I counted thirteen layers of management between me and the CEO, and I don't think I was even at the bottom of the organisation. I often wondered how much of my key findings document would have remained if it had been sent up through the management by the time it landed on the CEO's table.

Having said that, I do not mean to imply that the classic organisational model is flawed. When the chain of command and issues of authority and responsibility have to be clear, the classic organisational model is often the preferred one. In an ideal situation it enables leaders to make quick decisions, and it naturally filters and aggregates information as that information travels upwards so the leadership is not overwhelmed by details. Unfortunately situations are rarely ideal and as the organisation grows and people change positions, problems begin to appear.

It also important how the people on top handle the people below them. The classic model can work very well for everybody involved when people matter: consider enlightened despot, the ideal wise, all-powerful ruler who cares for the people, while at the same time keeping society's wheels rolling. In modern times welfare capitalism plays an important part in people's lives, in the sense that corporations provide their employees with quality welfare services for free, in order to keep them happy and healthy since happy and healthy employees are more productive and loyal. This can be vitally important in those countries where government cannot or will not offer welfare services for all citizens - it can be a great recruitment tool, too.

This is not about some non-profit legal entity but a full-blooded limited liability enterprise that exists to make profit. So what might the key characteristics be?

The Occupy Movement seems to have a self-organising horizontal hierarchy that considers all members equal. So instead of having leadership as a fixed position anyone can step up and try to convince others by making a good case in front of them. The executive authority belongs to the group as a whole - the General Assembly - and all members in the group have an equal voice. Positions within the group organisation are not assigned but instead people are allowed and encouraged to assume responsibility where they can make a meaningful contribution.

Corollary: When a new member joins the company others must relinquish an equal portion of their personal shares so that the new member can have an equal standing, and share responsibilities and rewards alike. From this it also follows that company shares should not be owned by people who are not actively involved in the company's daily operations.


Characteristic #2: Instead of meeting once a year, the shareholders should meet regularly in order to set policies and to make executive decisions. A good frequency for these general assembly meetings might be once a week when things are running smoothly.

Note: This is akin to most agile project models. For example, in Scrum the team meets every day to coordinate their efforts and share key information, and most organisations would agree that it is good to have similar meetings at least once a week.

Corollary: The company should be careful not to grow too large too fast, and to be mindful of personalities that do not mesh, otherwise there is a risk of losing the ability to make decisions. The risk of this can be mitigated by moving from consensus decisions to super-majority decisions (e.g. 90%-60% majority). This is a trade-off between simplifying the decision-making process by lowering majority limits, and increasing the risk of degradation of group unity.


Characteristic #3: As tasks and duties are not assigned to individuals by others, the group must be mindful of who is invited or otherwise allowed to join the company: it is not enough for new members to have valuable skills and knowledge, they must also have the right attitude, the ability to identify what needs to be done, and a willingness to assume responsibility for getting those things done.

Corollary: While a person might be invited to join the group for a specific thing that person can do, the group also must allow that person to grow and take part in other activities as he/she learns new skills and finds meaningful ways to contribute.


Characteristic #4: Teams are formed ad hoc as new functions and areas of concern are identified. A team exists as long as it is needed, group members are free to join and leave teams according to their ability to contribute and group members can be part of multiple teams as long as they can keep themselves productive. The general assembly has the authority to form and dismantle teams, while each team has the authority to organise itself into sub-teams as they grow in size and complexity as a way of managing the work load.

Corollary: A project team is an obvious example, but other corporate functions can be handled by ad hoc teams as well, e.g. Human Resources, Accounting, IT Support and so on. Although group members are free to participate in multiple teams people like to focus on what they are good at. However, by allowing and encouraging people to become involved with other teams the company as a whole can benefit from know-how that might be missed in a classic model corporation.


This is hardly a complete list of possible new model corporation characteristics, but I would call it a start. I might return to the subject later, but in the meanwhile all comments are welcome.
By Mark Stenbäck klo 22:02:00
Email ThisBlogThis!Share to TwitterShare to FacebookShare to Pinterest
Categories entrepreneur, freedom, occupy, organisation