Thoughts about The Occupy Movement (1/2)

The Occupy Movement has been spreading around the world rallying people to against economic and social inequality, and perhaps rightly so. For example, a little while ago EOCD published a study Divided We Stand: Why Inequality Keeps Rising that shows that the gap between rich and poor has been growing wider for decades in most countries (while in those few countries where the gap got smaller the gap had been ridiculously wide to begin with).

What I have found especially interesting is how the Movement is self-organising and self-directing: there seems to be no central leadership that is telling people what to do, where to go or how to handle matters big and small. The people as a whole do all that for themselves and quite effectively, too; everybody is allowed and even encouraged to voice their views and suggestions on various common issues as well as take part in getting things done. This model of horizontal organisation challenges the classic vertical organisation model that we all know well from the military, politics and corporate life.

So this go me thinking and wondering if the horizontal model could be applied to corporate business? Well, I'll cover those thoughts in the second part of this entry, but first let's have a quick look at horizontal organisation models.

Now let's be clear about one thing first: I have not personally attended any of the Occupy Movement camps nor had the opportunity to talk with people who have so my understanding is based on second and third hand information that I have gained by reading various articles about the topic. So please, do let me know if I've gotten something wrong and I do welcome all other comments, too.

As I understand it many Occupy Movement camps tend to be organised around a general assembly where each and every person has the right to be heard as well as has a vote. This basic form of direct democracy works well up to a point (as the citizens of ancient Athens probably would agree), but begins to falter as the number of people increases: soon there are so many people who want to be heard and so many competing opinions and proposals that proceedings take too long to make practical and timely decisions.

To mitigate this the general assembly can form working groups with clearly specified tasks and goals. Any and all persons are free to join a working group they feel important. Working groups are not only responsible for handling day to day operations but can also function as a specialist group which presents their findings / results / proposals to the general assembly, which then has a focused discussion followed by a vote between clearly defined alternatives, if necessary.

This kind of organisational model can be described as a network topology and when it comes to horizontal organisations there are several topologies that can be applied. The first and most obvious one would be the Star topology where the general assembly is the central hub that connects with 0..n working groups. In this model there is no interaction between individual working groups. Working group management and coordination is relatively simple. 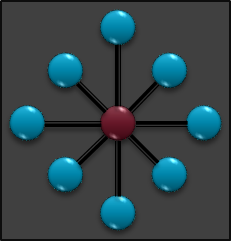 Another common model is the Partially Connected Mesh topology. Basically this might be the case when an individual working group splits itself to one or more sub-groups that may interact with each other while the results are presented to general assemply through the parent group. 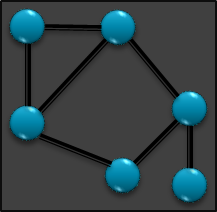 The third common model is the Fully Connected Mesh topology, which is at the same time the purest form of horizontal organisation and the least likely option to be utilised in practice, in my opinion. It is the purest form because there is no central hub nor any parent groups, all groups are completely equal with all other groups. There is no hierarchy that would limit communication and cooperation and this is what a general assembly essentially is: all individuals are equal and connected with each other, free to interact and cooperate with any and all other individuals. 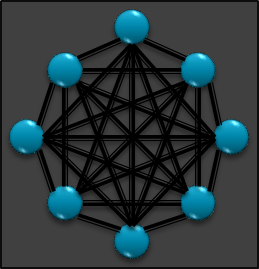 However, as stated before the cooperation becomes increasingly inefficient, difficult and time consuming as the number of connections grow i.e. the number of people increases. Eventually it becomes necessary to limit the connections which happens by forming one or more sub-groups with well-defined purpose and scope, which takes us back to the Star topology. As the organisation grows and people wish to keep operations fluid the Star is likely to evolve to a Partially Connected Mesh of one form or another.


A Bit About Group Dialogue and Decision Making

When there are tens and even hundreds of people who want to address the general assembly how does one ensure that everyone is given an equal opportunity to do so? In the spirit of total equality the group might be tempted to try shouting over each other until many voices merge into single voice (consensus) or just a few voices (interest groups) that can have a vote. It is more likely that pretty soon it will become apparent that the discussions need to be directed by a facilitator whose primary duty is to assign speaker turns and to impose timelimits. In order to further improve the proceedings the facilitator might also divide the discussion to separate topics so that one matter can be handled before moving on to another.

Would-be speakers are placed into FIFO stack (First In, First Out). In other words those who raise their hands first get to speak first.

While one person speaks the rest of the people can react and respond with a set of hand-signals. This is an excellent method for the crowd to provide direct, real-time feedback to the speaker without causing disrupting noise. People can express e.g. their agreement, disagreement, ask questions and demand missing details as well as urging the speaker to speak louder, keep to the topic or to wrap up.

Some groups aspire to become more equal than other groups so they may adopt a progressive stack, which prioritises some people over other people in the name of equality. The idea is that the minority representatives and marginalised groups are allowed to speak before the majority representatives and dominant groups. This can be a good thing if minority and majority are determined within the context of discussion instead of social status (remember: people are supposed to be equal, therefore social status should not make any difference) based on more or less fixed attributes such as their skin colour, sexual orientation, profession, gender or even age. However, in my mind, assuming the position of primus inter pares while still speaking of equality is a lie.


Well, that's the first part of my blog. The next part is a thought experiment of how a limited corporation might work if it is organised horizontally instead of vertically.

Update: Thoughts about the Occupy Movement, Part 2 has been published.
By Mark Stenbäck klo 04:12:00
Email ThisBlogThis!Share to TwitterShare to FacebookShare to Pinterest
Categories freedom, occupy, organisation